I took this photo of North Berwick Law on Sunday.  The beech trees on the left of the hill were planted over three hundred years ago to commemorate the Act of Union between the Scottish and the English Parliaments in 1707.

In the background, North Berwick Law

Robbo from Oz, Blind Dave and myself went round to Fat Mac’s house last night to try to encourage him to lose some weight.  Robbo demonstrated that it is possible to drink low-alcohol beer, but Mac didn’t seem very interested.

Our next ploy is to sponsor Mac to do a full day’s work.  This is another novel concept for him, however if he does actually put in a full day at Catherine’s Cupcakes, doing the washing up, brushing the floor and so on, we’ll give some money to a charity of Catherine’s choice.

You can check out their sounds here.

There were several combinations of players. 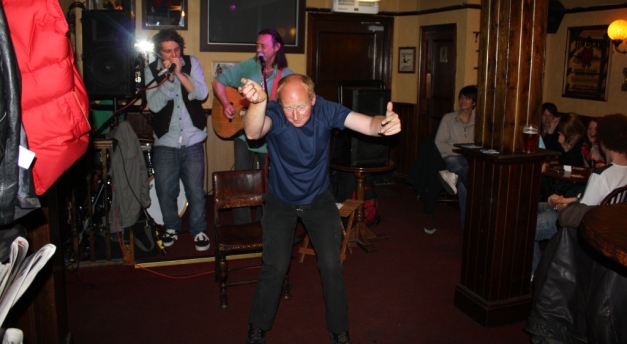 Late on, this chap got up and 'danced'

The moothie guy was very good

Out the back is a smokers corner, with a comfy chair.

And also some confusing signage:

Having seen the following announcement by Palgrave Open:

Palgrave Macmillan is pleased to announce the launch of Palgrave Open which offers authors of accepted primary research papers the option to publish their articles with immediate open access upon publication.

With Palgrave Open authors can choose to pay an Article Processing Charge (APC) in order for their article to be made available to non-subscribers.

– I thought I would contact them about whether these developments would result in a reduction in their subscription charges.  After all, I reckoned, if an author pays an APC for an article to be made available to non-subscribers, should that not mean that the subscription cost for the journal will be reduced?  As more and more journal publishers offer OA options (e.g. Wiley Open Access), this is a relevant question.

Here’s the answer I received by Twitter, which explains the situation with respect to Palgrave:

No, volume pagination will be increased so that OA papers in addition to normal pagination, but without reducing acceptance criteria, ie if we publish 20 OA pg we’ll aim to publish an “extra” 20 non-OA pg so subscibers are not paying for the free stuff.

I also asked Wiley, and here is their response:

Subscription rates for all our journals are reviewed annually and the proportion of OnlineOpen content is considered, if applicable.

An important issue for publishers and researchers to address is how to identify OA papers found in indexes and elsewhere in advance of a researcher having to click on the article titles and going to the publishers’ website.  It could be very time-consuming and annoying to constantly click through to articles when hoping to land on an OA paper in a subscription journal with an OA option, only to find that that particular paper is not OA and that you, or your institution, did not have a subscription for the journal.

If the publishers don’t address this issue, then there will be few benefits to authors paying Article Processing Charges for papers in subscription journals with OA options rather than either publishing in the journal in the normal way, or in fully OA journals (where it will be more obvious to everyone that all papers are available via OA).

Heather Morrison (The Imaginary Journal of Poetic Economics) recently wrote about some issues with these ‘hybrid’ journals with OA options in her post Let the competition begin! Dramatic Growth of Open Access June 30, 2011

I invite any publishers with OA options to contact me about the above, and one possible solution to this discoverability issue, at macleod.roddy [at] gmail.com

I’d tell you more about my battles to buy and load anti-virus software from McAfee, but you probably wouldn’t believe them.

Here are some of the ‘highlights’.

One of my laptops had a McAfee anti-virus corporate product loaded on it, from when I used it whilst employed.  This product eventually failed to update itself, which I suppose is fair enough.  The laptop then caught a virus which took me some time to remove, and after it was removed it wouldn’t execute any .exe file until I eventually sorted that problem as well.  Two-days worth of effort, essentially.  My own fault for not noticing that the anti-virus was a corporate product and was not updating itself.  No complaints, so far.

I then thought that I’d buy their home-user anti-virus software, to replace the corporate product.  Two days later, having tried many different things, and having run the uninstall program for several hours, the home user product wouldn’t install because some remnants of the corporate product remained on the laptop and refused to be removed.

I tried phoning a number which came with the product order confirmation, to discover that the most likely option would cost me £1 per minuted for technical assistance.  £1 a minute to sort a product I’ve just paid for!  No way.

I eventually got through to a customer services person, who was quite helpful, and who emailed me with something that I could try (which didn’t work), and then the same person suggested an online chat with one of their technicians.  There was a 30 minute queue, but I waited in line for the chat help.  He eventually couldn’t fix the problem, and said it was an issuue for their corporate side of things.  The URL he gave me redirected me to my original starting point on their website.

I then had an hour-long GoToAssist session with another of their technical people, who remotely took over my laptop (fascinating to watch), and tried various things, but failed to install the product I’d bought.  He said I wouldn’t be able to load the home user McAfee product, or in fact any other anti-virus product from anyone else, until the corporate stuff was removed.  In the accompanying chat session, he started to call me ‘Sir’ and apologised three times.

He gave me a Reference number and advised me to call Customer Services and quote that number, which I did, but they said it was not the right number that he’d given me.  They gave me a new number to phone, because they couldn’t redirect my call for some reason.

I called this number, and thought at this stage I was getting somewhere, as they promised that their corporate people would phone me back.  I told them that I’d be out for the rest of that day, and could they phone before 12am the next day?  Yes, they said.

Someone called Richard from McAfee corporate phoned at 4.30 pm on the day I said I’d be out in the afternoon.  Half way through the message he left on my answerphone, he says he’s reading the case report for me and can see that I will be in before 12 am the next day, so he’ll phone me back first thing.

I waited in all morning, but there was no call.  I got Richard’s number by dialing 1471 and phoned it back.  It was answered by someone temping in their reception.  Was I a corporate customer?  No.  Was I enquiring about a product?  No.  Eventually, she grasped what I wanted, but said there were several ‘Richards’ in corporate, but she’d pass the issue on to her supervisor, who would get back to me.

That’s as far as I’ve got, after nearly a week.

One question I have is this – if you’re not retired, how can you possibly get through all these sagas?  In any case, I’m retired, yes, but it doesn’t mean I don’t have things to do.

On Sunday we all went to the Borders Book Festival, held in the Harmony Garden in Melrose. 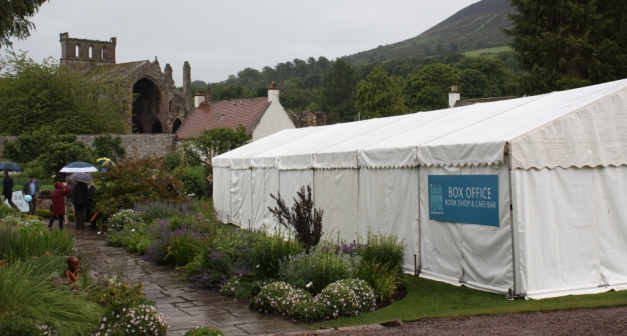 Melrose Abbey in the background

It was very busy, but a shame that the weather was so changeable, with several heavy showers resulting in everyone at times sheltering in the cafe/bookshop marquee.  Lord David Steel and James Naughtie were there.

We attended two events, the first one was The Scots: A Genetic Journey, by Alistair Moffat.

Alistair Moffat presented some finding from a survey of Scotland’s DNA history.  A fine speaker, the audience was engrossed by his presentation.

The second event was In Shackleton’s Footsteps, by Henry Worsley.

On the right, Henry Worsley

In 2009, Army officer Henry Worsley and two others retraced Shackleton’s 1909 march to a point 97 miles from the South Pole.  Worsley recounted both journeys.  In 1909 Shakleton was forced to turn back and retrace his steps to the coast.  In 2009 Worsley continued to the Pole.  Once again, the audience was enwrapped by the presentation.

The day turned out to be quite expensive – with four tickets to buy for two events, the total cost was £88.

The Epiphyllum flowered, and two days later it wilted. 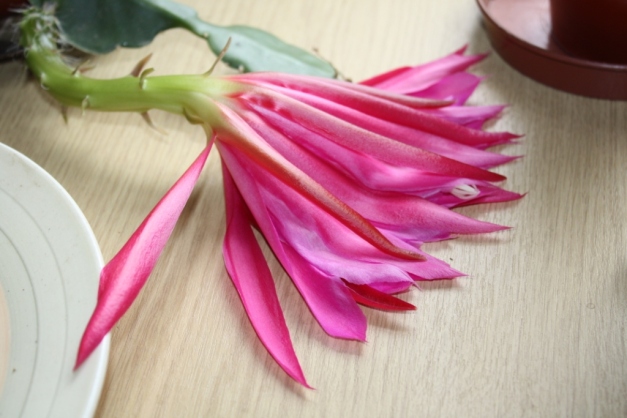 Would you Adam & Eve it?

Posted by Roddy MacLeod on June 18, 2011
Posted in: Uncategorized. 1 Comment

They’re digging up the end of the road yet again!

Why are they digging it up again?  What are they looking for that they didn’t find the last time they dug it up, not so long ago?

On Monday evening we went to the Night of Adventure, at the Vue.

This event featured a very entertaining collection of speakers from across the spectrum of expeditions, adventure and travel talking about their various exploits, and was in aid of Hope & Homes for Children for which £7,500 was raised.  See #NightofAdventure on Twitter.

The large venue was sold out, which was impressive.

Check out the links above for some superb stories, videos, blogs and books.

Posted by Roddy MacLeod on June 16, 2011
Posted in: Uncategorized. 5 Comments

After Aberdeen, we drove to Huntly, and camped in the Huntly Castle Caravan Park. 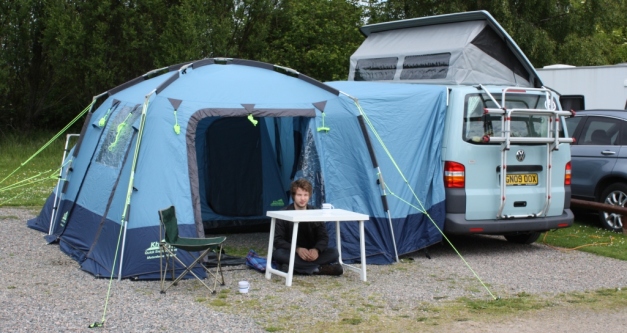 Shaun and the rig

This gave us the chance to look round Huntly Castle. a Historic Scotland site. 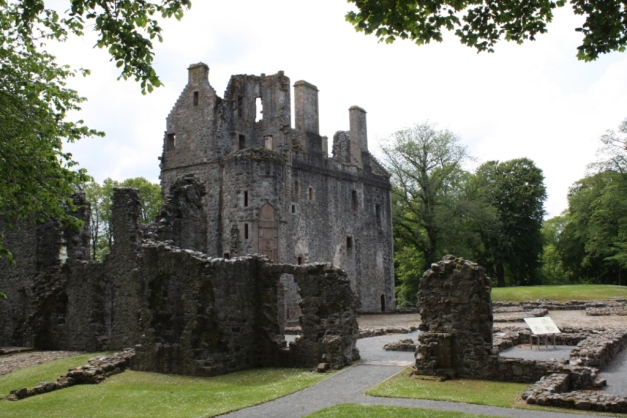 Just up the road, they were playing cricket.

Huntly is an historic town, dating from the 12th century when it was known as Strathbogie.

We visited Dean’s, where they produce excellent shortbread using traditional methods and as much locally purchased products as possible.