Out of the Canyon

During my formative years in the 1960s I lived through a short period in time when anything at all seemed possible.  It was round about 1969 – a very good year before it eventually turned sour.  To paraphrase Ray Manzarek and also Joni Mitchell, we were stardust and golden, and we were the precursors of that time to come when the races, nations and religions of the earth will blend together to sing, dance and have great copulations.

What a fantastic frame of mind!

Well, that time to come is not now, because although some race divisions have disappeared, in their place are more religious conflicts, and as mentioned in one of my past posts about politics, there are also some who would create more political divisions even within the United Kingdom.  That’s a great shame – in my mind we should instead be working towards getting rid of nationalism.  Here’s a question for you, and before you look at the link, see if you know who wrote: “As nearly as possible, no nationalist ever thinks, talks, or writes about anything except the superiority of his own power unit. It is difficult if not impossible for any nationalist to conceal his allegiance.”

Hmm.  I rest my case, for a few seconds, so you can think about that one.

Of course, many things have changed in the world since those words above were written, but the principles remain the same.  One can understand how some people might feel their group identity is being challenged due to the rapid growth of new methods of mass communication and its results, but that does not mean there is a need for even more political division and strife.  Those same communication systems can also be used to express shared experience and culture, and enable it to grow.

Someone contacted me a few months ago about my post on the myths of the Clearances.  It was a very nice email from a historian.  Among other things, she wrote, “I was thrilled to find your blog post of 10 January: ‘Perpetuating some myths of the Highland Clearances’. About the time that you posted this, I was being attacked with brutality that might almost compare to Patrick Sellars’s on a web site that claims to be for ‘serious historians’ of Scotland for having the gall to say many of the same things you do in your post.”

Her experience is, unfortunately, only too common.  Nationalists too often let their passion get the better of themselves.  There’s nothing wrong with passion, in itself, but not when it leads to aggression.  I expect that we’ll see a lot more of this sort of thing over the coming months leading up to the Referendum.  Yesterday, a newspaper reported a rise in anti-English racism in Scotland.

Nationalism was thankfully not a mainstay of the hippy era, back in the 1960s, in fact, it was quite the opposite.  Music definitely was a mainstay, though.

One of my heroes, Ken Kesey, even used it to diffuse some gathering tension once when he went on stage during a large political rally that was in danger of breaking out into violence.  He played hawonka-wonka-wonka on a guitar, and sang “Home, home on the range” and everyone gradually calmed down.  Thirty years later, I was so fortunate to see him and Ken Babbs on stage in Edinburgh, at the Queens Hall.

Over the years, I’ve been fortunate to see various other bands who started out during that era and I’ve written about some of them on this blog, for example Canned Heat, but there’s also been Little Feat, Fleetwood Mac, Neil Young, Brian Wilson, and others.

I’ve read a few books about bands from that era, as well.  Mostly they are tales of various kinds of excess, designed to titillate as much as inform.

A book which is quite different from that genre is Canyon of Dreams: The Magic and the Music of Laurel Canyon, by Harvey Kubernik. 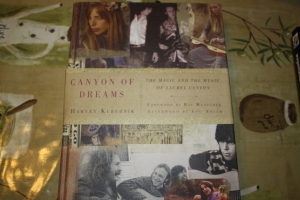 I came across this book as a result of watching a YouTube video of poet Stephen Kalinich being interviewed by Harvey Kubernik.  That video is well-worth watching, and shows Kalinich as the gentle man he is who is not phased by the rather harsh questioning and direction of Kubernik.  Kalinich is also featured on this video, where at 4:20 he’s a little overcome by the emotion of the occasion of dedicating the Beach Boys Historical Monument in Hawthorne.  By the way, Kalinich tweets as @starcries and we follow each other.

Checking out the interviewer lead me to Canyon of Dreams. 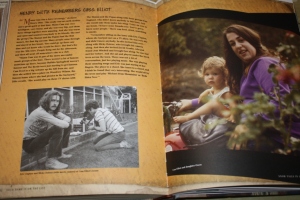 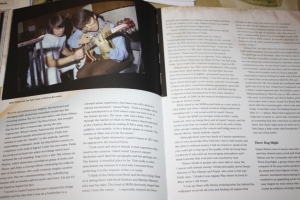 Canyon of Dreams, which is about the legendary creative community based in and around Laurel Canyon in California may be a fascinating book, but it’s not the easiest of reads due to the number of name-drops.  On every page and just about every paragraph, you have to focus your mind on those who are mentioned, and fit them in to your own musical recollections.  The book is none the worse for this, though, and in fact it’s an essential part of the work, but it does require a lot of concentration. 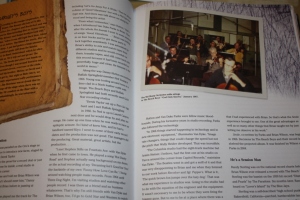 Numerous bands, and their members, are detailed, and I was amazed to see how many of them are featured in my own music collection.  Laurel Canyon housed a very creative community, comparable to, and surpassing, those of Greenwich Village and Montmartre in previous eras.

This is a very valuable book for it’s reflections and connections, and I’m enjoying reading it.  I’m taking my time, though.

It’s essentially a guided journey through the Canyon and its residents, its jazz and hipster beginnings, its players, its movie-people, its hangers-on, its connections, its creative people, its actions and hangouts, its bad boys, its cars, bars and clubs, its session players and the nearby recording studios.

“The Canyon was not just a spiritual escape; it provided its own means of earthly propulsion.”

If you want even more on the Canyon, there’s Inside The LC: The Strange but Mostly True Story of Laurel Canyon and the Birth of the Hippie Generation.

12 comments on “Out of the Canyon”