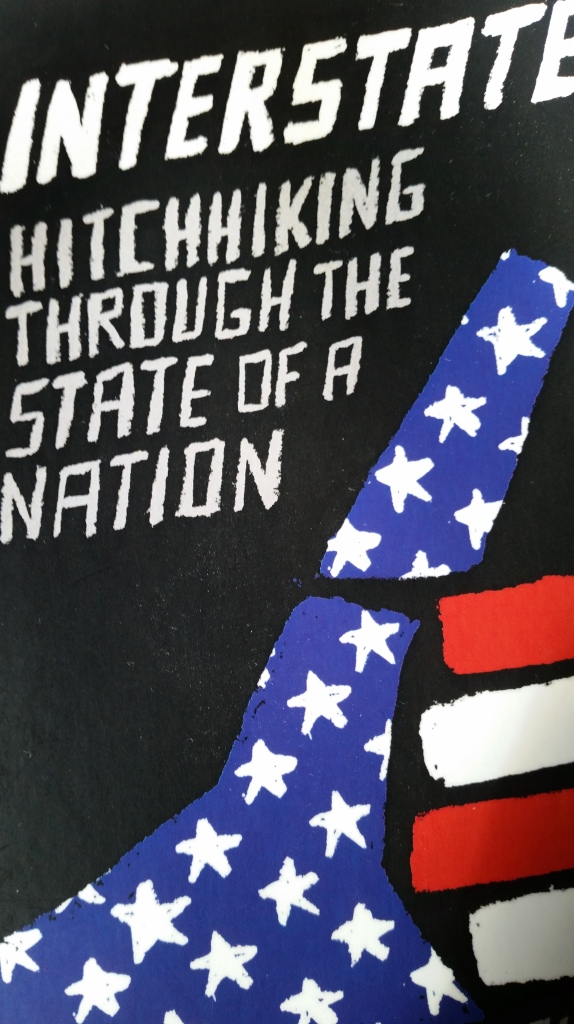 I like road movies.  I also like road books.  Hmm…is there actually a genre such as ‘road books’?  I don’t think so.  A ‘roadbook’ (one-word) has a definition “…a diagrammatic book typically used by rally co-drivers and overland travelers to navigate across uncertain terrain.”  I don’t mean ‘roadbook’ in that sense.  I mean a book which is like a road movie, in which the main character is travelling by road.  A specific type of travel book.

Interstate, by Julian Sayarer, is such a book, and I really enjoyed reading it.

The boy can write!  Sometimes in a very creative way, as well.  Occasionally, I couldn’t follow all of it, but that wasn’t important, as the gist was still obvious.

“Outside, I sat beneath the lip of the roof, bleached green by copper running with old rain.  A vegetable patch and long line of harvested beanstalks stood opposite, behind a few leeks waiting to be dug from the soil.  From the rafters of the porch hung four haunches of venison, the blood drying in the sacks of translucent skin remaining on each muscle, shaped in red harps set with black strings.  The wind blew earily through the valley and so came the gruff sound of a length of twine pulled down by the weight of dead limbs, sliding slowly against the metal hook that held each swaying haunch.  Beneath the hanging meat, an old hurdy-gurdy with a broken leg sat under a covering of dusty soil.”

I particularly like the imagery in the following paragraph.

“Misery seeks company.  I nod, mutter condolences as she goes on folding clothes and I watch, thinking how small she once must have been.  I look at the woman: her bucket-sized head, her shapeless, moonlike body, her fat arms made of ringlets, like two giant caterpillars crawling out of her torso, flying as she shakes out blanket-sized T-shirts pulled from the washing machine.  Her gut must be two and a half metres all round, about the size of the tyre on her truck.  She’s a sphere, just four planes that pull towards the crushing circumference at her middle.  Sure, she’s disabled now and deserves compassion, but still, this size ain’t normal.  As she stands there, it’s as if I can see and feel her own arteries squeezing, fighting, waiting to disappear into themselves and give up ghost.  I see her father standing next to her, just as I saw her ginormous husband in the canteen with her.  And I wish heart attacks on nobody, but really, was anyone surprised, was cardiac failure considered bad luck and does she expect a fate so different for herself?”

The book is about a hitchhiking road trip across America, and the ‘state of the nation’ as exemplified by the people Sayarer meets and sees on the way.  OK, a concept that’s been done before, but not recently, partly because hitching is more and more difficult in today’s untrusting world.  A fair number of the people Sayarer comes across are blue-collar workers who seem to have lost most of their purpose in life in modern-day USA.  Even though every ride he gets is a moment of faith restored, by the time he reaches Modesto, in California, and has to walk for miles, he’s had enough, and the writing gets weird, but weird in a creative way.  There’s also a tip of the hat of course, at one point, when he’s jumped on a freight train, to Ti Jean.  There had to be, didn’t there?

I did a fair amount of hitching when I was younger.  Now, I can’t remember the last time I saw someone with their thumb out on a UK road.  I used to hitch from Edinburgh to Elgin and back on a regular basis.  Sometimes I could be up in Elgin before opening time (11am, when the pubs opened, in those days – the seventies), and sometimes not, when there were few lifts.  I must have walked nearly every step of the old A9 during those days, and long stretches of other roads, as well.  As Sayarer points out, on page 58 of my Arcadia Book edition, you need a good place to stand.  There needs to be a place for a lift to stop, as well.  But sometimes, there are simply no lifts.  I once took seven hours to get 30 miles.  So, sometimes, you need to walk.  In Interstate, Sayarer walks quite a lot.

Why are ‘road books’ so good to read?  I think that one reason is that it is easy for the authors to write about the real characters they meet, and yet there’s unlikely to be any comeback.  The author, and the people he meets, are like ships that pass in the night.  If you write a book about people you know well and see on a regular basis, it is much more difficult.  What are those people going to think when they read about themselves?  Even in this blog, I have to be careful.  Obviously, or maybe not so obviously, when I write posts about Fat Mac I tone things down considerably, and because he spends most of his time dozing in the bath thinking about ‘the sivinties’ there’s little chance that he’ll read the posts, in any case.  It’s the same with many travel books – I’ve written about Paul Theroux in the past.  Being a travel book, he can write: “They drove away, leaving me by the side of the road.  That was to be fairly typical of my experience with aid workers in rural Africa: they were, in general, oafish self-dramatizing prigs and often, complete bastards.” It’s unlikely that he’ll come across those same people ever again.  But sometimes, even with travel books, there’s a comeback, as I described in this post about an experience Theroux had.

Sayarer is pretty hard on modern Americans.  Here’s what he says:

“They say America’s socially flat, a classless society.  And you know what, I couldn’t agree more.  They are dead right: Americans have no class, none at all, no style or gravity either, they lack the modesty that class demands.  As for the idea that Americans have no social prejudices, no class system, that idea could not be more wrong.”…”Americans don’t split social hairs so much on a basis of refinement or culture, but money.”…”Cancel the aid budgets, tell the DEC that America is the world’s foremost humanitarian catastrophe.”