The Cat from Huế 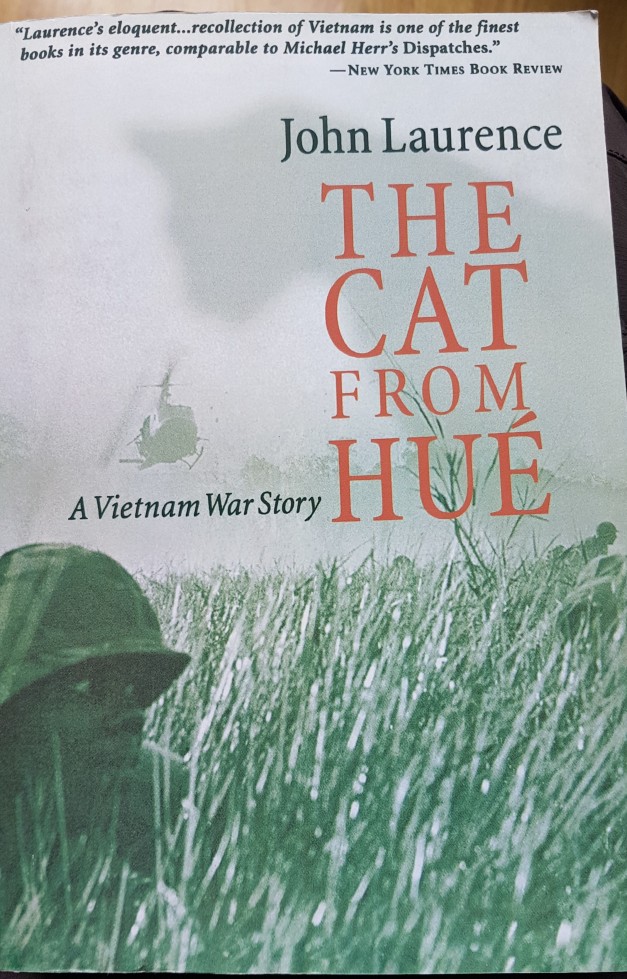 The Cat from Huế, by John Laurence, is a big book – in fact, it is 850 pages long.  However, it received glowing reviews, and that was enough motivation for me to get interested.  The introduction, covering seven days from February 19th, 1968 to February 26th, 1968 and featuring the Battle of Huế and the early troubles of the cat in the book’s title, is also long.  It’s not until page 90 that John Laurence writes “So here is my story. Come, if you will.”  By then I was glued, so I came along.

As well as being terrible things, wars can result in innovations.  Imagine the creation of a 15,000 member force in the 1960s, the US 1st Cavalry, and the decision to move entirely by air using 450 helicopters.  This was an entirely new military concept for the mobility of troops and looked likely to succeed.  In addition, the Americans had plans to spearhead a social and economic revolution in the rural areas of Vietnam, aiming at redistributing land, improving living conditions in the countryside, the introduction of generous new programs to help communities develop and put an end to corruption.

What could possibly go wrong?

It is easy to see how the first wave of Americans arriving in Vietnam would have felt very positive about their involvement in Vietnam.  First, they needed to get rid of the threat posed by the Viet Cong.  With thousands of U.S. military personnel arriving every day in 1965, supported by the latest combat hardware and an impressive airforce, the expectation was that victory would not take long.  Even the pessimists said that it should be over in a year.  By a near-unanimous majority of the US Congress, the administration had been given a blank cheque to preserve South Vietnam as a non-Communist state and thereby demonstrate that the Communist world, especially China and the Soviet Union, would be defeated in their attempts at subversion and armed aggression.

As a professional journalist, Laurence wanted to be honest in his reporting, and be a bridge between the American troops and the American public.  He certainly was not a propagandist, but like virtually everyone else in the West in 1965, he regarded the cause as honourable, and expected a US victory in short time.

He followed troops into battle, put himself in extreme danger, got shot at, and gradually saw why the VC were so difficult to defeat – mainly because the VC often avoided pitched battles and faded into the bush only to return to villages once the Americans and South Vietnamese forces pulled out.  Laurence loses friends in battles.

After the death of a journalist colleague, Laurence goes back to the US for a while, but eventually is drawn once again to Vietnam where he experiences a terrifying battle at Con Thien.  He gradually sees the pointlessness of the whole war, and that the Americans who came to liberate the people end up killing more and more of them, and getting killed themselves.  Later on again, he is on the ground during the Cambodia Campaign.

As for what happens to the cat, I won’t spoil it.  You’ll have to read the book yourself.

One of the characters mentioned in the book is Sean Flynn, a journalist and the son of Errol Flynn.  Sean was a friend of John Laurence.  Sean, along with Dana Stone, another friend of Laurence, went missing in Cambodia (as did several other journalists).  A few years ago, and again more recently, somebody reckoned they’d found their bones.

2 comments on “The Cat from Huế”