Lindsey and I really enjoyed the Rumours of Fleetwood Mac show last night at the Queen’s Hall. 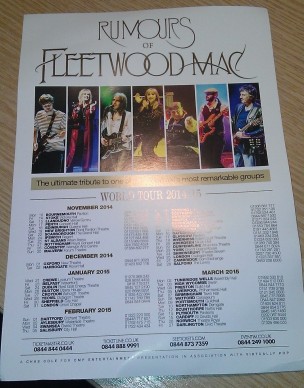 Rumours of Fleetwood Mac is a tribute band to Fleetwood Mac, and they are currently on tour.  The band is tight, they sound great, they’re all good musicians, and of course the songs they play are some of the best ever recorded.

The first set included mostly songs from the Buckingham-Nicks-Fleetwood-McVie-McVie lineup, then there was a break, and when the band returned they played some earlier songs, and finally Tusk, Go Your Own Way, and Don’t Stop. Awesome!

As with many tribute bands, several of the musicians look like their counterparts, though the drummer manages to look like both Peter Green and Mick Fleetwood, and the keyboards player also looks a bit like Mick.  The two lady vocalists had super voices.

Francis Plug – How To Be A Public Author

My friend Fat Mac is stuck, mentally, in the 1970s.  Most of his attitudes and opinions seem to stem from that decade, including his perspectives on politics, society and economics.

Mac has had two books published in print, and has also self-published several more on Amazon.  His attitude towards marketing them is strictly from the 1970s – he feels that it should be enough for him to do the writing alone, and that everything else, including promotion, should be taken care of by others.  Most of the reviews of his books on Amazon have been very positive, and include phrases such as “possibly the funniest book I’ve ever read” and “it offers plenty to the younger readers who will undoubtedly have a lot of fun reading it.”  However, I was amused to see another reviewer write, “the author is in serious need of psychiatric help.”  I’d agree 100% with that.

Since the 1970s, things have changed a lot in terms of book publishing, but much of this has passed Mac by.  I’ve tried to encourage him to write magazine articles, but apart from one which was published in Instant magazine he’s declined to do so.

A long time ago he did a radio interview, but ended up terrifying the interviewer by starting off saying that, in reality, he was a werewolf.

Readers of this blog will know that I’ve attended a number of book launches, and on a couple of occasions I’ve taken Fat Mac with me.  Usually, he looks very uncomfortable at such events, drinks as much of the free wine as possible, and then insists on leaving to go to a bar that he remembers from the 1970s.  I’ve also invited him to various literary festivals, including Lennoxlove (which is not being held, this year), and the Borders Book Festival, but it is always difficult to get him out of the house.  This is a shame, as by attending such events he could see how the publishing world works, today.

Book launches and public appearances by authors are very much a part of today’s literary scene.  The reading public is demanding more and more from authors. 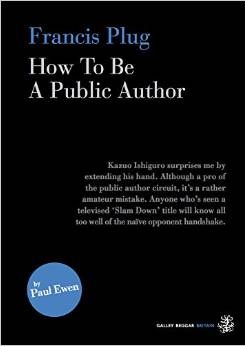 Francis Plug is the author creation of Paul Ewen.  The title of Ewen’s book is, Francis Plug – How To Be A Public Author.  It purports to tell of Plug’s experiences at various book launches, signings and literary events in preparation for a self-help manual for prospective authors.  It’s not the funniest book I’ve ever read (that, by far, was You Are Awful (But I Like You), by Tim Moore), but it is very clever and humorous, and I found that it grew on me, more and more, as I read through it.  The Plug character is almost certainly in need of psychiatric help, and has the habit of imagining that something has just happened, and then reacting on it.  It ends up being a surreal comedy.  Plug also has a booze problem, and cannot work a camera.  So, amusingly, there are several similarities with Fat Mac.

Posted by Roddy MacLeod on November 2, 2014
Posted in: General. 1 Comment

After last night’s fundraising fancy dress party in the Dalriada, Mary Njoki has reached her target of £3,000 to be split between for two charities, and is off to climb Mt Kilimanjaro in December.  Well done Mary! 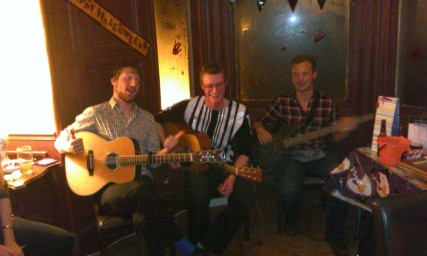 The Monkey Sessions played at the party.

Lindsey did some face painting. 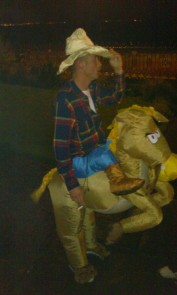 This chap came as a horse.