These are Open Access (OA) journals that have been added recently to the Directory of Open Access Journals (DOAJ).  They may be new journals, or they may just be new to DOAJ.  Their Tables of Contents (TOCs) are available in JournalTOCs, the journal

Journal of Pregnancy – Table of Contents

Fantastic day for a run

What a lovely day it’s been – barely a cloud in the sky.  I ran round Arthurs Seat in the morning, starting at Figgate Park.

The route home goes past the Sheep Heid

On the way back, I ran past the Sheep Heid Inn.  Bonnie Prince Charlie had a pint there the night before the battle of Prestonpans.

I used to do part of this run with Fat Mac, but nowadays, what with the eating and drinking, he’s become too decrepit to manage it.  Even earlier in the year he’d huff and puff at a snail’s pace up the gradient, and I’d have to wait 15 minutes for him to catch up.

The other day I did this run and a younger runner passed me going up the hill, but then I started to catch up with him, and I was quite pleased until he veered off to run to the top of Arthurs Seat.  So, this is what I’m now setting myself as a target – two or three times a week to run to the top.

Portobello’s first Big Beach Busk happened on Saturday.  We were a bit late getting down to the beach, which had been even busier earlier.

The most satisfying moment of my life. Are you taking the piss?

It was 1977, I was 25 and on the magic bus.  Not ‘The Magic Bus’ to Istanbul and other exotic places further east, but one of the many low-cost competitor magic buses, going from London to Athens.  We’d been making good progress.  Leaving London Kings Cross at 6pm, we reached Dover in the evening, Zeebrugge at 1am, and had arrived in Paris for breakfast.  Now we were somewhere in the south of France, at a roadside café, eating a late lunch.  I had a couple of glasses of wine, and got back on the bus.

The bus had no toilet.  It had two Greek drivers who spoke no English and who were in a great rush to get home.  One drove, whilst the other slept.  There was an English courier called Mike, who spoke very little Greek.  His main functions were to make sure no-one got left behind, decide which cassettes to play, and keep people away from the drivers.  “The drivers are a bit crazy.” Mike told us, “Don’t talk to them.  They just want to get home, so we’ll be going for some time now until the next break.”

The next break wasn’t until the middle of the night, when we halted at a small garage somewhere in Switzerland.  The garage was closed up for the night, and Mike told us we’d be there for twenty minutes while the drivers stretched their legs and changed over.  Thank goodness!  I really needed the toilet.

Everyone trooped off the bus through either the front or back doors, then spread out in the courtyard and bushes and proceeded to take a leak, the girls going behind an outhouse.  As I’d been sitting in the middle of the bus I was about the last to get off, and I’d no sooner found a suitable wall when a great commotion ensued.  The garage watchman had woken up, noticed thirty people doing the toilet in every corner of his premises, and had set his guard dog loose.  The bus’s horn sounded urgently as everyone hurriedly clambered back on board and we set off once more at speed, with the dog barking furiously at our exhaust and the watchman waving his fist at us.  I hadn’t done the toilet.

The next stop was Venice, at about 7am, where four passengers were due to leave the bus.  I didn’t really care where it was, such was the state of my bladder.  I only wanted to know where the public toilets were, and fortunately they were nearby.  Mike informed us that we had only ten minutes, because we were behind schedule.  The toilets may have been just the other side of a square, but there was a queue.  Now, I don’t know about you, but when I’ve been trying to ‘keep it in’’ for a long time, I take a few seconds to start.  A space eventually appeared at the urinal, and I’m standing there saying to myself, “Come-on…come-ON”, when the now familiar sound of the bus’s horn went, not once but twice.  For a moment I considered just staying in Venice rather than going to Athens, but my luggage was still on board. I zipped up without relieving myself, and ran back to the bus just as it started to pull away, praying it wouldn’t be too long until we stopped again.

Well, it was a while, six hours to be precise.  I counted them off as I also counted off the millions of sunflowers by the roadside as the morning drew on – anything to take my mind off my, by now, very urgent need.  It would have been pointless asking Mike or the drivers to stop again.  Hadn’t we stopped already in Venice?

The next time we drew to a halt was at the Yugoslav border.  The Greek drivers dropped us off to go through passport control, and indicated they’d pick us up again on the other side, as soon as possible.  I found a toilet!  But it was for ladies, and there was a queue, preventing me from sneaking in unnoticed.  Then I found a gents!  But it was firmly locked and obviously not in use.  There must be somewhere to take a leak.  How about behind that shed?  Not with those armed guards slouching by the wall.  They wouldn’t take kindly to someone pissing on their premises.   “Passport please.”   Before I knew it, I was through customs and back on the bus and we once more drew off at speed.  At least, my seat being situated in the middle of the bus, the bumps weren’t too bad.

The afternoon turned into evening, and on, and on, we went.  Surely we’d stop soon, but then I noticed Mike passing a sandwich to the driver.  He was eating, on the go.  Later still, the drivers swapped over without stopping the bus.  When would the torture end?

We didn’t stop again until 1am, somewhere in the east of Yugoslavia.  The exhausted drivers both needed some sleep, and Mike told us we’d be in the truck park for at least two hours.

Four countries, two-thousand kilometres, 34 hours, and finally…somewhere to take a piss.  It was, without doubt, the most satisfying moment of my life as a stumbled through a bush and relieved myself.

Afterwards, and it obviously took some time, I walked slowly back across the tarmac, got back on the bus, and calculated that if I didn’t spend a penny in Greece, I’d be able to afford to fly home rather than take the bus back.

We’re very fortunate to live in a city which has produced so many writers.

As my next post will have a toilet theme, I thought I’d show the excellent facilities at the Book Festival. 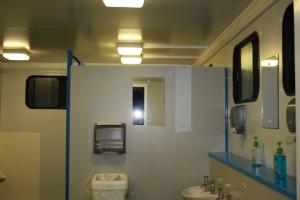 Mezze in The Lot

Had a hot chocolate with Donald in The LOT the other day.  Donald seems to have walked the length and breadth of Europe at one time or another, and was able to advise on our forthcoming trip to climb Puig Tomir in Mallorca.  We’re also hoping to walk up Cornador Gran from Sóller.

This was my mezze:

Last night I atttended The Year of Open Doors: New Writing at the Edinburgh International Book Festival.  This was an event organised by Cargo Publishing, an up-and-coming publisher of Scottish writing, in the Highland Park Spiegeltent, Charlotte Square Gardens.  The place was packed, and everyone enjoyed the readings given by the authors who have contributed to the anthology. 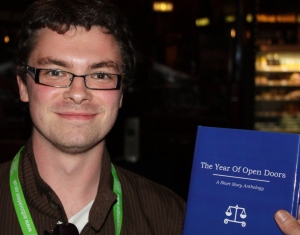 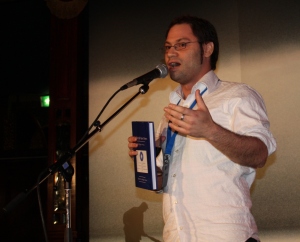 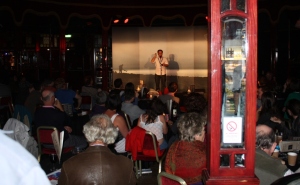 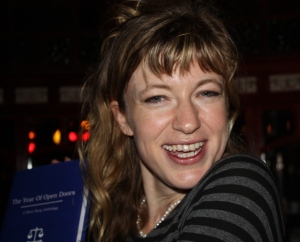 Sophie Cooke, one of the contributing authors 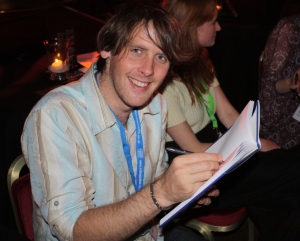 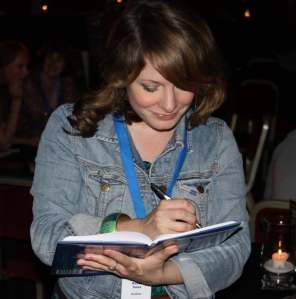 Here’s a review of the book. 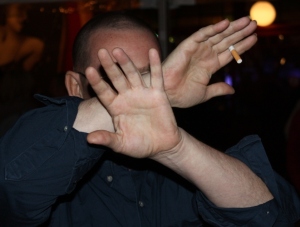 One of Cargo Publishing's future authors was a bit camera shy