Advantage of not cycling with Fat Mac

An advantage of not cycling with Fat Mac is that I don’t get drunk.  With Fat Mac, it’s a case of:

“Where shall we bike to, Mac?”

“Are you sure you know the right cycle-path?”

What happens is that, after a mere ten minutes, Mac stops his bike and exclaims:

And we end up in the Cramond Inn.  Two hours later, the inevitable has happened.

This is a theory that sounds plausible at the time, but has been shown again and again not to work. 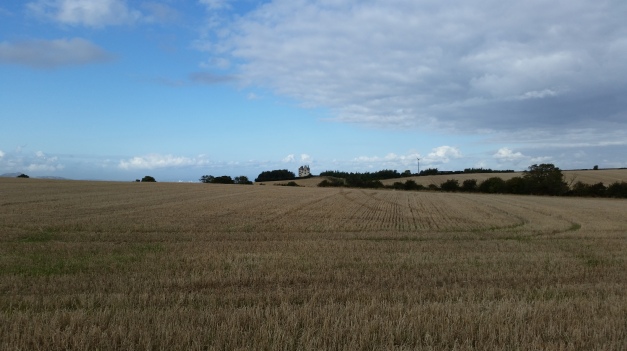 Today, instead of ending up in the pub with Mac, I cycled some backroads that lead eventually to Fa’side Castle. 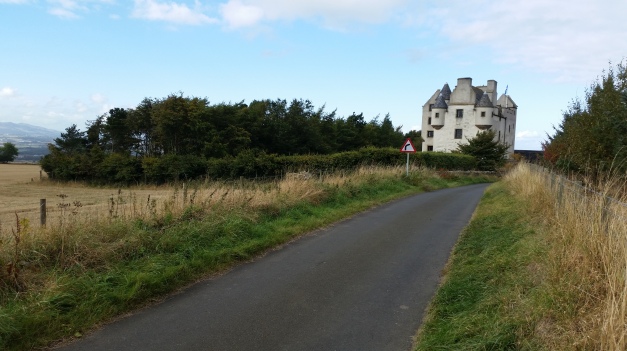 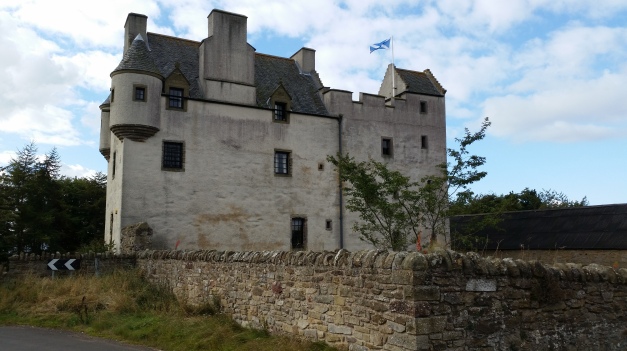 The castle is mostly 15th and 16th century, but it is sited on a hill giving broad views across to the Pentlands and Edinburgh, and I bet that there was a construction there in ancient times. 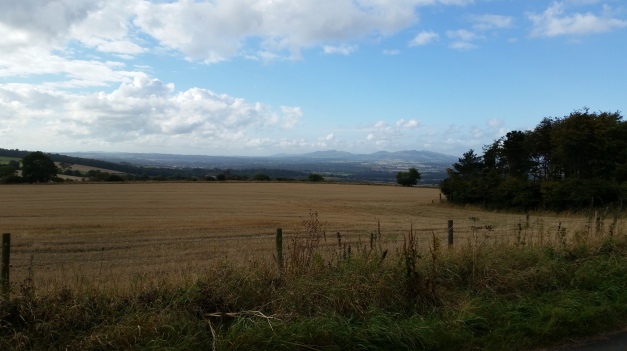 I can remember the castle from the early 60s, when it was a ruin.

Back in January 2010, whilst I was jogging down the road to Musselburgh, I stopped briefly to speak to a friendly old chap with a backpack who asked me for directions.  His told me his name was William Cockfield, and you can read my original post here.  He told me that despite having only 18 pence, he was intending to walk the length of the country.  He seemed fit, warmly dressed and clean. 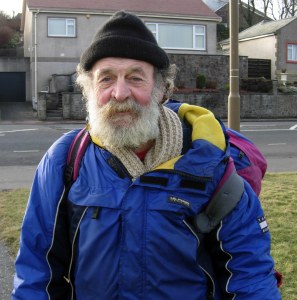 My blog entry of January 21, 2010 was picked up by various people who posted a number of updates about William over the years.  From these I can tell that he made it to Cornwall, and then Cheshire, Liverpool and Essex, so it seems he kept walking for a long time.  Later on, he was briefly in Basildon Hospital, and then a care home.

I was very pleased that so many people posted update comments on my original blog post, which they must have found by googling ‘William Cockfield’.  Each of them seems to have appreciated that William was quite a character.

William ended up in one of the Regal Care Homes.  The manager of the care home contacted me on Monday to say that William had passed away peacefully in his sleep that morning.  She continued, “I am sure he is now lacing up his hiking boots ready for his next journey R.I.P. Will, we will miss you!!”

We very much enjoyed the Sunday afternoon session of the Edinburgh Mountain Film Festival.  This consisted of three short films, and a lecture.

The first film was called Chasing Water, and was about someone who followed the course of the Colorado River from its source to where it peters out into a puddle – the mighty Colorado no longer reaches the sea.

The second film, called Britain’s Last Wilderness – A Week Without Food, was about some lads who headed to Knoydart to see whether they could live off the land.

The final film was very touching.  The Journey was about Paul Pritchard cycling in the Himalaya.  Pritchard was a leading rock-climber until a large rock fell on his head causing disabilities (most of his right side doesn’t work anymore).  He cycles using his left leg and stearing/braking controls for his left arm.

The lecture and slideshow was given by Dr Andrew Murray, who completes various long distance runs, including one up Mt Kilimanjaro, and less than a week later after a further 350km jog, one up Mt Kenya.

Posted by Roddy MacLeod on January 2, 2013
Posted in: Runs. 3 Comments

Yesterday saw an excellent turn out for the Portobello Promathon, and a lovely sunny day as well, but with a bit of wind from the west to make the last mile feel more than a mile.

The winner was Ross Matheson in a time of 19:34

I’m definitely getting slower!  Due to my support team being off doing her own run, there are no photos this year.

Whilst jogging and cycling (I’ve been cycling for the past week due to a temporary tendon problem that prevents running) here and there, I’ve noticed that several local bakeries have folded over the past year or two. 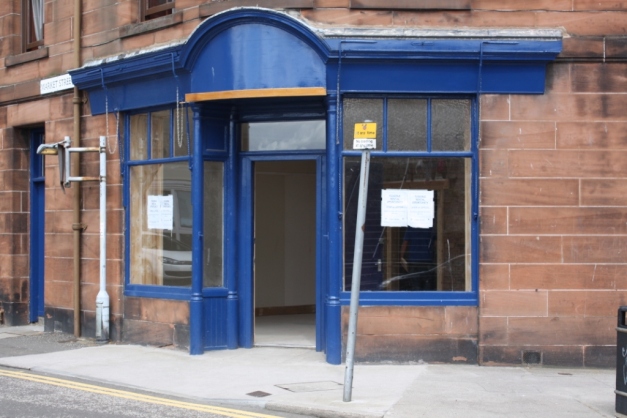 No longer a bakery

There used to be one alongside the River Esk. 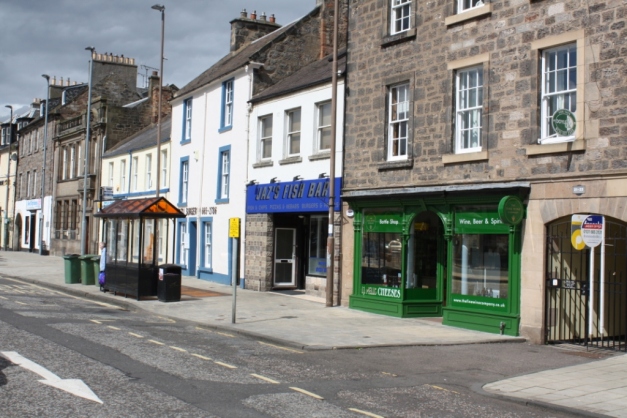 One of these shops used to be a bakery

There used to be one in the square at Musselburgh. 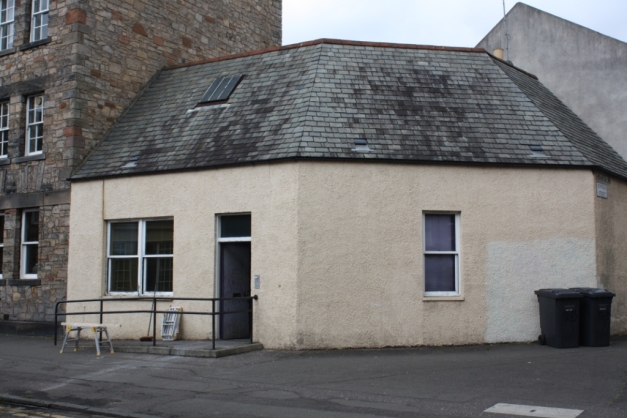 I think this was once a bakery

And there used to be one in St Leonards. 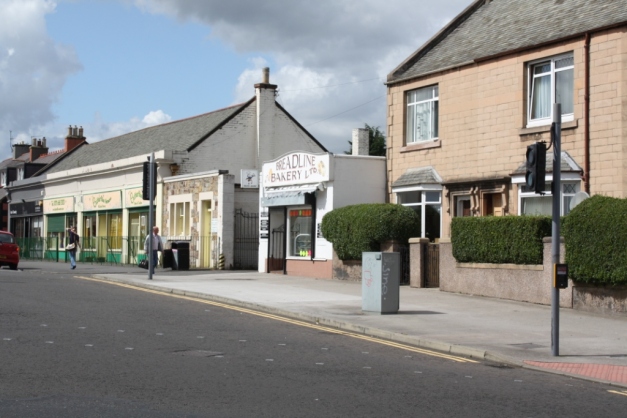 There’s still one in Stoneybank, Musselburgh, where I bought my meat pie today.  Very good it was too.

Another good turnout, and lovely weather, for the Alloa Half Marathon this year.  If you’re looking for the results, they can be found here.

The crowd is always good for this run, and their encouragement is very welcome.  The route is also good – along the base of the Ochil Hills.  There’s a bad hill at about 11 miles.

There were two unfortunate lads who collapsed at 12 miles, and neither looked well at all.  It’s just as well that Fat Mac didn’t pitch up – there were so many runners that he’d probably have set a record by needing an abulance before reaching the starting line.

Not sure who these are - maybe previous winners 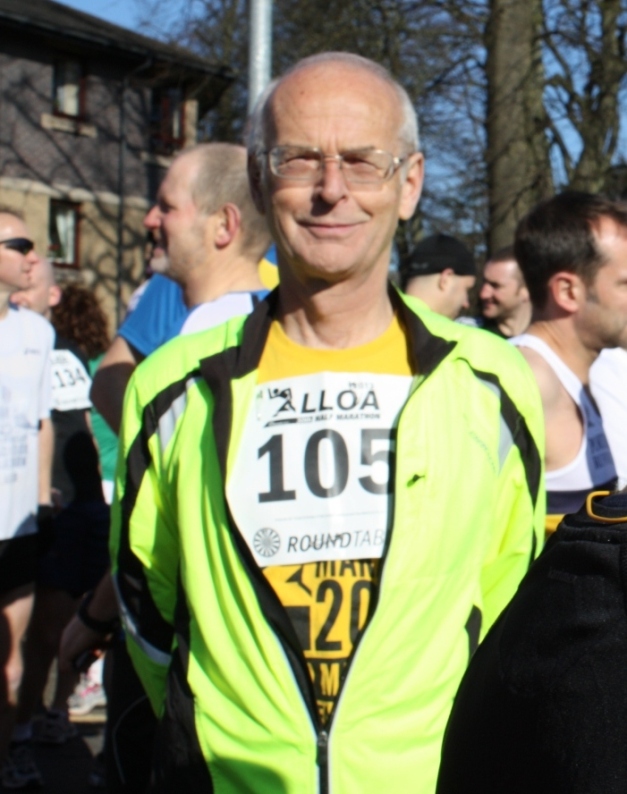 The route circles round after the start 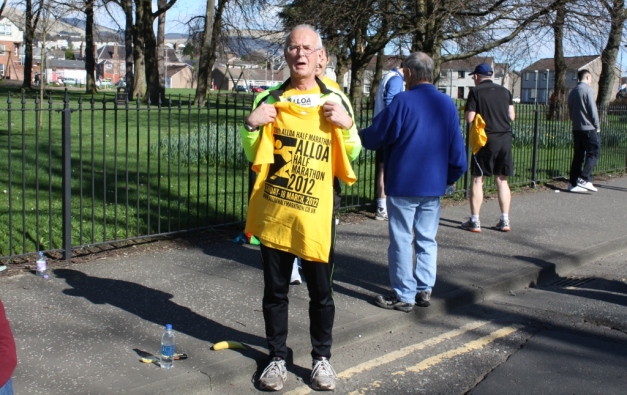 As I’m now an ultra vet, or whatever those over 60 are called, I no longer warm up with a coffee and a ciggie, so I was fair gasping by the end. 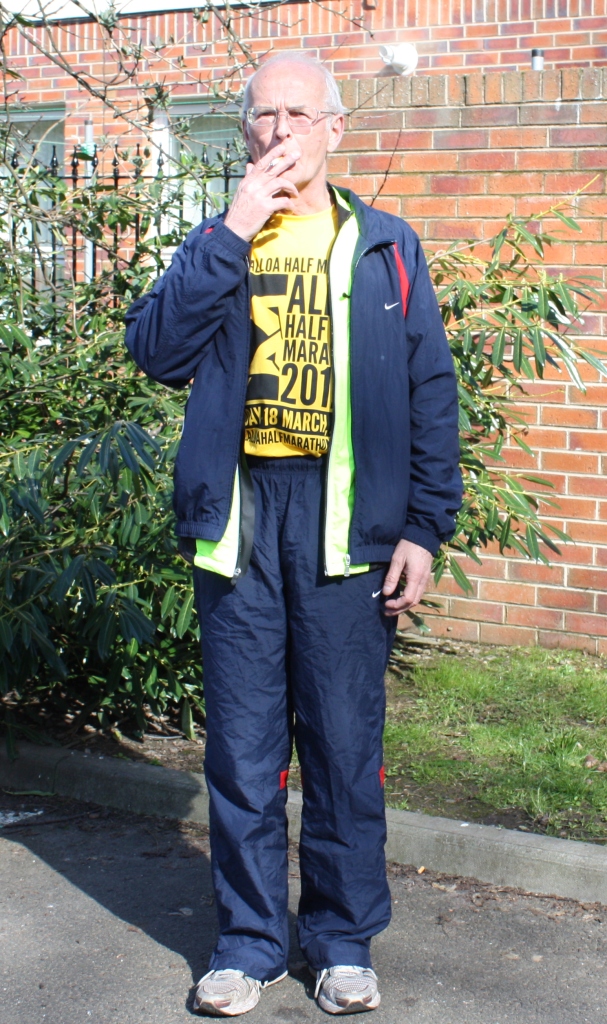 A warm-down ciggie in the carpark at the end

My chip time this year was 2:01:02 and I was 31st in the M60 category.   I was just beaten by a young woman athlete running pushing a baby buggy.  It was great running behind her, as the crowd gave her special cheers.

Here are the winners.

I arranged to go for a run with Fat Mac some time ago, but nowadays he can’t even manage to run to the offie if he finishes his carryout and the shop’s about to close, so the plan was that he’d cycle whilst I ran.  However, on top of everything and the usual hangover, he’s now got a cold, so couldn’t come.

My goodness, he’s let himself go the past few weeks.  He must have put on a further three kilos or more.  The exclusive diet of potatoes and Guinness can’t help his vitamin deficiency.  Also, laying in the bath for two hours every day isn’t good for his various skin conditions.  I’d thought that an hour’s fresh air would do his scabs some good, but it wasn’t to be.  Instead, I ran 9.5 miles round Musselburgh Racecourse and back by myself.

I’m looking forwards to the Alloa Half Marathon.  Once again, despite the promises, Fat Mac won’t be there.